Excerpt ~ Blame It On The Voodoo 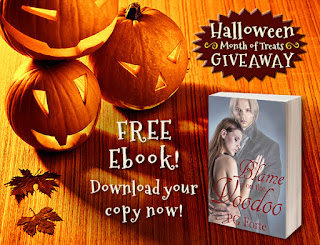 My short story, Blame It On The Voodoo is today's free ebook at the Halloween Month of Treats Giveaway. This is a fun story inspired by a trip to New Orleans with the Nine Naughty Novelists. I still harbor dreams of turning Zee and Rene's story into a series of supernatural mysteries. They were such fun characters to write. You can get it free today at: https://halloweenmonthtreats.blogspot.com/

“It’s getting to where you can’t swing a dead chicken around here anymore without it
smacking into one damn psychic or another.”

Zirondelle Doucette couldn’t help the grin that spread across her face as she listened to
her Aunt Serafina’s complaints. Her aunt stood at the window of their family’s shop, staring out
at the street, and Zee didn’t have to guess too hard to figure out the cause for her discontent.
Another “damn” psychic had recently put out her shingle in the previously vacant storefront
directly across from their own.

“And if it’s not a psychic it’s a card reader,” the other woman continued, grumbling
crossly. “Or a palm reader. Or tea-leaf reader—”

Serafina turned her head to glare at her niece. “Don’t sass me, Zee. You know exactly
what I’m talking about.”

“Yes, Ma’am, I do.” Ducking her head, Zee started in on the next charm. She knew it
wasn’t psychics per se with whom her aunt had a problem. Serafina was a tolerant soul, not the
kind who’d ever take a stand against anyone else’s religion or spellcraft or spiritual beliefs. It
was the idea of all those make-believe mystics making a mockery of their family’s calling that
was trying the older woman’s temper, and not without cause. The Doucette family had owned
and operated their establishment in the self-same Royal Street location for several generations,
dealing in authentic rituals, in candles and jujus, talismans and spells. It was hard not to take it
personally when your way of life was turned into a kind of circus act by greedy imposters. But as
Zee and her aunt both knew, the charlatans did in fact have a place and a purpose in the grand
scheme of things.

Oh, how the tourists loved them. They ate up their acts and purchased their trinkets as
eagerly as they did the beignets at the Café du Monde. Or jazz on Frenchmen Street. Or
hurricanes in Pat O’s Courtyard. It was all part of the Crescent City mystique, like Po’ Boys and
crawfish, pralines and beads. In an odd way, they kept things safe. They kept the merely curious
from straying into dangerous territory.

“It’s him.” Serafina scurried back behind the counter where her niece was working,
babbling nonsensically. “He’s back. He’s coming this way. What should we do? What does he
want this time?”

“Do about what?” Zee asked, feeling mystified and mildly exasperated. “Who’s back?”
She loved Serafina; truly she did. Her aunt had taken Zee in after her parents passed, without
question or hesitation—the only member of their somewhat eccentric family who seemed to have
any idea about what to do with a bewildered little girl who’d suddenly been orphaned. Zee would
never forget the older woman’s kindness but, all the same, there were times, like now, when
dealing with her aunt seriously tried Zee’s patience.

The Doucette family had a certain reputation; they were known for being fierce and
fearless. They prided themselves on it, in fact. But Serafina had always been unusually timid for
a Doucette. Right now, her pale eyes, also unusual in a Doucette, were wide with fear, the pupils
dilated; her voice was but a whisper. “Monsieur Boudreaux.”

Boudreaux. The name itself meant very little. It was as common as dishwater around
those parts. But between the look on her aunt’s face and the singing certainty in her own heart,
Zee knew exactly which Monsieur Boudreaux Serafina meant. She meant Rene Alcide
Boudreaux. Zirondelle’s Monsieur Boudreaux. Dominant. Vampire. Master.

But not her master. No, not yet.

As the door to the shop swung open, Zee trembled inside. She couldn’t even raise her
eyes to gaze upon the shadow that she knew must be filling the entryway. Odd, considering that
shadow contained the very thing for which she’d been longing.

“Good evening, Madame Doucette, Mademoiselle.” Rene glided into the shop with his
usual preternatural grace. He had a way of moving that Zee found mesmerizing. And his voice!
That subtle growl, as dark and seductive as midnight, left Zee wanting to fall to her knees at his
feet and declare her submission right then and there. She dared not, however. Not with her aunt
looking on. Not when she hadn’t yet been granted the right.

“Monsieur Boudreaux.” Serafina’s voice shook a little as she returned his greeting.
“What a surprise. We weren’t expecting you.”

That was sadly true, Zee reflected. Although he’d once been a regular customer, stopping
by every few weeks, things had changed in the last decade. Nowadays it was not unusual for a
year or more to pass between encounters. Rene’s last visit to the shop had been three months
ago. The occasion was burned into Zee’s memory because it was then she decided that enough
was enough. It was time to take matters into her own hands, to go after what she wanted, to stop
waiting, hoping or dreaming that Rene might someday recall her existence. She could be dead by
the time that happened!

“Indeed,” Rene agreed. “However, I’m sure you’ll appreciate that circumstances have
made it necessary that I return sooner rather than later. I’m here because of the spell that’s been
placed upon me—the curse, if you will.”

“I assure you, Madame, the mistake is not mine. It would, in fact, be rather impossible for
me to be mistaken about such a thing. You see, if there’s one thing we vampires are very familiar
with, it’s curses. Centuries of people wishing one dead or ill tends to naturally have that effect.”

“But…who would dare do such a thing?”

Zee glanced at her aunt in surprise. Any number of people, she was tempted to reply. Was
that not the very reason Rene had been coming to them all these years? He’d been their most
loyal customer since practically the first day they’d opened for business. The Doucettes had
grown rich selling charms and protection spells to people like Rene Boudreaux. Even if she
privately shared her aunt’s skepticism, surely it was bad business to mention the fact!
Rene’s brow furrowed. He stared searchingly at Serafina for several seconds, then
inclined his head. “I apologize. I’m sorry to have alarmed you, Madame. I can see now that you
had nothing to do with the difficulties I’ve been experiencing. Might I have a word with your
niece? In private?”

Zee could tell her aunt was gathering her courage to refuse. She was touched by
Serafina’s protective instincts, but right now those instincts were as unnecessary as they were
unwelcome.

“It’s all right, Auntie,” Zee said quickly. “Why don’t you go into the backroom and brew
up one of your tisanes. I’m sure it will help calm your nerves.”

Serafina gazed piteously at her. “Zee…”

“It’s all right,” she repeated, a little more firmly. “Really.” She patted her aunt’s arm and
smiled reassuringly. It was more than all right, actually. A chance to be alone with her beloved
Rene? That was cause for celebration! But even so, as her aunt, with a sad little nod and a
reluctant backward glance, retreated from the room, Zee found a little of her confidence
deserting her. Her gaze dropped once more. The rush of blood was so loud in her ears she could
not even hear Rene’s footsteps on the floorboards. Oh, but she felt his approach just the same.
His powerful presence pervaded the atmosphere. She was paralyzed by it, enraptured, entranced.

Her name on his lips was the sweetest caress. His words were a command she could not
disobey. She glanced up immediately, gaze locking with his piercing blue eyes. “Yes?”

“Wh-what? Me?” She drew in a shaky breath. “You do?” Well. It was only about time,
wasn’t it? After all, she’d known it was him for most of her life. He was her destiny, her fate, the
other half of her soul.

Zee’s heart sank. Was that all he was talking about? Disappointment fueled her defiance.
She tossed her head and demanded, “And? What if it was?”

“Then you will remove it. At once.”

His eyes widened. “You would dare defy me?”

Would she? The thought shook her and, for just a moment, she considered backing down.
She didn’t want him angry with her, after all. Even if she weren’t madly in love with the man,
she still would never want to make an enemy of him—no one with any sense at all would want
that! On the other hand, desperation was a powerful goad. At this point, she was willing to go
pretty far to attract his attention. And if this was what it took, so be it.

Besides, foolish or not, she just could not bring herself to fear him all that much. She’d
known him all her life. This was the same Rene Boudreaux who was so kind to her as a child,
who’d comforted her as no one else could have following her parents’ tragic and untimely
deaths.

It was he who’d found her, hiding beneath a table in the funeral home, paging feverishly
through a book of spells she’d taken from her grandmother’s house, looking for something—
anything—that might bring them back. Curses were not the only things with which vampires
were familiar. They knew death and loss better than anyone else. When Rene had promised her
she would not die from a broken heart, when he insisted no spell was necessary, that her parents
had not really gone anywhere, that those we truly love will continue to live on eternally,
enshrined in our hearts forever, Zee believed him.

Now, remembering that day, remembering all his kindness—both then and after—a smile
curved her lips. “Why not? I think I would. After all, I know you’d never hurt me.” Not unless
she wanted him to. 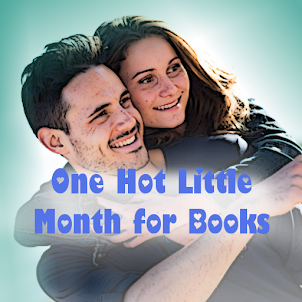